Hiring premises and halls at the Mikulov Chateau

The state rooms and halls at the Mikulov Chateau are the perfect choice for hosting social banquets, corporate celebrations, weddings and teambuilding events. 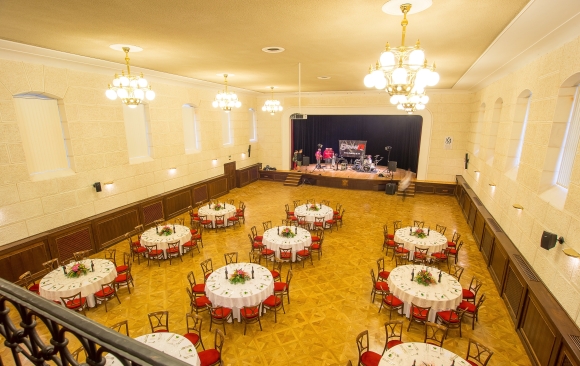 The largest hall of the chateau is located on the ground floor on the north courtyard. The premises of a former riding school from the early 18th century are a perfect choice for conferences, social events, balls, receptions and banquets.

More about the Large Hall 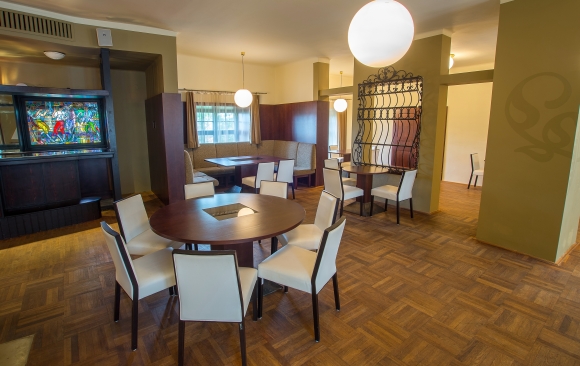 In a wing on the second inner bailey there is a so-called Wine Bar and lounge with a period stove. The Wine Bar is often jointly used as a supporting facility during events in the Large Hall.

More about the Wine Bar 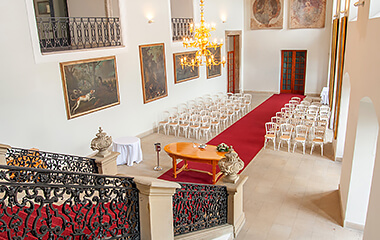 The Entrance Hall is known for its excellent acoustics, thanks to which it’s often used for organizing concerts, wedding ceremonies and receptions. Its dominant feature is a massive staircase leading to the Hall of Ancestors and Gröll Hall.

More about the Entrance Hall 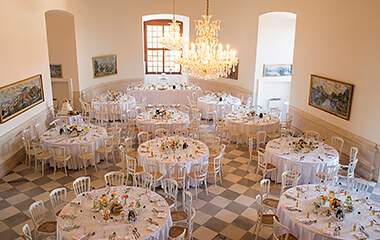 The Hall of Ancestors

The Hall of Ancestors is one of the main halls of the chateau. Nowadays it’s decorated with a fresco by the painter Rudolf Gajdos and crystal chandeliers. This stylish space is the perfect place for hosting a festive banquet or corporate event.

More about the Hall of Ancestors 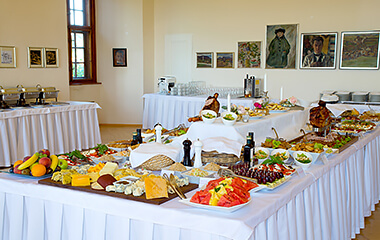 Gröll Hall and the adjoining Gröll salon are decorated with the artworks of early twentieth century artist Wenz Gröll depicting the picturesque landscape beneath the hills of the Palava. These more intimate rooms can be used for smaller parties or corporate presentations. 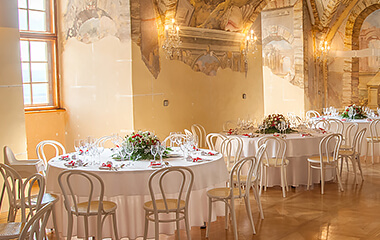 The Sala Terrena draws visitors with its Baroque paintings and the adjoining terrace, offering views over Austria. It’s also connected to the chateau gardens and its halls are conveniently arranged. It’s a popular place for wedding ceremonies and family celebrations. 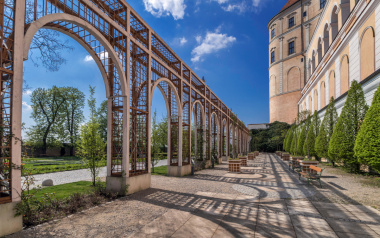 The former orangery, an inseparable part of the Baroque gardens, has been situated under the arcades of the eastern balcony of the Mikulov chateau since the end of the 17th century and served as a place to protect orange trees in winter time. It was demolished in the 19th century and today it is commemorated by a light wooden structure with climbing roses, a shady place for the park visitors to rest, and at the same time offering space for various chamber events, theater performances, concerts and for wedding ceremonies due to its romantic atmosphere.

More about the Open Stage - Orangery 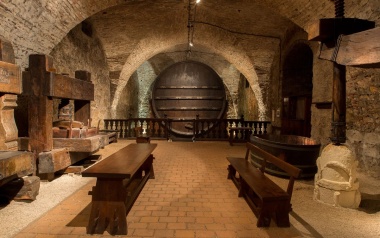 Even the past owners of the Dietrichstein estate used to present this magnificent giant barrel in the chateau to their important guests. In 1672 it was admired by Emperor Leopold I and in 1683 by the Polish King Jan Sobieski. The oak barrel was used to store the so-called tithe of wine collected from the local vassals and it could store up to 1,014 hl. The unique atmosphere of the cellar originating in the middle of the 16th century is achieved with a collection of historical barrels and presses, including a massive log press from 1791 or a barrel decorated with graceful carving of cats, proving the perfection of craftsmanship of our ancestors.

More about the Chateau Cellar

The chateau garden, which consists of a number of terraces at different heights on the perimeter of the rocky Castle Hill, combines the modern concept of the park with a historical reminiscence of a sophisticated Baroque play with colors and shapes and underlines the representativeness of the entire chateau. Interesting flower beds in the main eastern part are mixed with beds with herbs, a botanical garden with thermophilic plants, and a rose garden on another of the terraces. They all are perfect for relaxation and private meetings during the cultural events in the open air.

More about the Chateau garden

By consulting the calendar you can easily check whether your chosen room is vacant at the time that suits you. Or you can just choose a date and pick one of the rooms that is vacant on that day.

How to make a booking
1.

Pick one of the available dates

All the available dates can be found in the booking calendar.

Click on a date that is available in the booking calendar or click on Book (the Wine Bar, Hall of Ancestors etc.) directly on the page of the hall you’ve chosen.

Fill in the form

To complete the booking you will need to state your name, telephone number and your e-mail address. If you have any requests or comments regarding your booking, please include them on this form.

After filling in all the information, please send the form to us and a copy will be returned to your e-mail address. Shortly thereafter we will contact you to confirm the details of your booking.

The Regional Museum in Mikulov is a semi-budgetary organization of the South Moravian Region. besides hiring out the halls of Mikulov Chateau it also organizes regular exhibitions and looks after the permanent displays of the museum’s collections.

How to find us